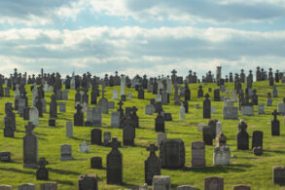 Introduction to the graveyard at St. Peter's Church, Halliwell

St. Peter’s Graveyard is entirely a creation of the Victorian Period when Industrialisation was at its peak and the populations of towns such as Bolton were increasing at a very fast rate due to the migration of workers from the country to seek better paid work in the mills and other opportunities in service and commerce. This unprecedented concentration of people combined with a high birth-rate and a relatively low life expectancy (less than 55 years at that time) caused by malnutrition, unsanitary living conditions and lack of understanding of the causes and treatment of even common illnesses meant that Churches in the expanding industrial communities were required to have large graveyards wherever possible.

Situated as it is on the outskirts of industrial Bolton the newly opened church of St. Peter’s Halliwell soon required a substantial graveyard.

The church was first consecrated in 1840 and the first burial was James Pendlebury on the 26th. November 1840. A new-born baby of just 15 days old this infant burial was a very typical occurrence at the time.

1) Initially the graveyard extended over the Old Ground and Middle Ground – the area of the graveyard bordering Church Road and adjacent to the rear of the church.

2) A later bequest of land extended the graveyard to the south of the church to reach the original field boundary wall which is still partly visible at the top of the Clough. This is covered by areas A – N on the plan.

3) A final acquisition of the remaining available land up to the Moorside Avenue boundary completed the graveyard as we know it today. This areas is referred to as “New Ground” and encompasses areas NA, NB and NC.

Both Old Ground and Middle Ground were quickly filled with burial plots during the Victorian and Edwardian Periods. Areas A – N contain graves mostly dating from the Edwardian Period up to the 1950’s and it is here that the majority of War Graves from both World Wars are to be found. Burials in the New Ground area date mostly from the immediate post-war period up to the present day.

The Church is completely surrounded by graves. In fact the graveyard as a whole is full up. The density is such that there are nearly 5000 graves in total – which probably represents the interment of around 15000 individuals. With a total area of approximately four acres St. Peter’s has one of the largest Church Graveyards in the north-west.

The majority of these burials took place in the Victorian and Edwardian Periods when life expectancy was much shorter than it is today and child mortality was at its highest. A significant number of Victorian family graves contain the burials of several (sometimes 3 or more) new-born and very young children and sadly on occasion with their mothers as well. It is very probable that at times, perhaps in a flu epidemic for example, that a burial would take place at St. Peter’s every day of the week.

It is hard for us to imagine just how wretched living conditions could have been for the urban poor at that time, a quarter of whom lived in absolute poverty.

Accommodation was unsanitary with shared drinking water supplies and rudimentary sanitation. Tenements were often damp, particularly basements, and everywhere was overcrowded – entire families may have occupied a single room and of course sickness, unemployment, drunkenness and the resulting crime were the norm. Malnutrition was a major factor in ill-health. Few families could afford sufficient food – much less a healthy diet. Air pollution and lack of sunlight contributed to all sorts of diseases. Vitamin D deficiency was a major cause of the bone-weakening disease ‘rickets’ and it had become so prevalent that it was known to the rest of the world as ‘The British Disease’.

Even in Edwardian times the main causes of illness were Pneumonia together with Influenza at the top of the list – closely followed by Tuberculosis, Gastrointestinal Infections, and Heart Disease.

The prevalence of these types of disease are indicative of the generally poor living conditions of the time. But – the cause and treatment of many common illnesses are not well understood and they are by no means exclusively a problem for the poor and any sort of epidemic and diseases like pneumonia and tuberculosis affected all sections of society indiscriminately.

Many poor families would have struggled to afford a burial plot and could certainly not afford an elaborate memorial stone – graves without any sort of headstone are quite common in St. Peter’s graveyard. There are also a significant number of unmarked Common Graves – provided by the church along the margins of the main burial areas or donated by better off members of the congregation. The density of burials in the Common Graves is generally higher than that in family plots.

As with all Christian graveyards St. Peter’s is set out with the burials facing east (to receive the awakening light of dawn on Judgement Day). The density is very high, in fact as high as it possible to be and would not comply with the current requirements with regard to spacing and access.

There is a distinct progression of styles in Memorials from the earliest ones closest to the Church which tend to be rather plain but substantial slabs, frequently laid horizontally, through the elaborate and ornate monuments of the high Victorian period to the more modest headstones of the 1920’s and 30’s and the smaller plain slabs of the post WW2 years and present day.

The Victorian fashion for elaborately decorated monuments, often inscribed with rather sentimental verse was probably at its height in the later part of the nineteenth century, after that the taste for ostentation gradually declines. St. Peter’s has a significant number of elaborate memorial stones and this is indicative of the wealth generated in the Parish by manufacturing at that time.

There are several Family Vaults in the Victorian part of the graveyard and these are very visible due to their much larger memorials – in many cases with a pillar or obelisk. Several of these obelisks are particularly tall and imposing in polished grey marble.

A large number of graves originally had stone kerb edgings – sometimes inscribed – which outlined each individual family plot. In the post-war period the sense of responsibility towards keeping family graves tidy and in good order sadly diminished markedly and the standard of upkeep of graveyards generally declined.

To ease the maintenance burden for volunteers the Church of England decided that these kerb edgings together with any in-fillings should be removed from all graveyards so that grass could be established, in theory at least, easier to keep in good order by mowing. The removal of the edgings was carried out at St. Peter’s in 1980-81.

Unfortunately the inherent unevenness due to settlement of the ground caused by burials together with a lack of volunteers makes this an ever-present problem for all churches but here at St. Peter’s we are very fortunate to have a very dedicated maintenance team.

Mention must be made of the War Graves for the Fallen of the Parish that are present in St. Peter’s graveyard. In total there are 31 War Graves – 20 from WW1 and 11 from WW2. The majority of these are the typical very evocative small plain white upright slabs provided by the War Graves Commission but a few individuals are buried in family graves (these are still officially recorded as War Graves). The War Graves Commission carries out regular inspections of War Graves in this country and overseas and will instruct Churches if upkeep is required – or in some cases carry out this work themselves.

So finally, what about the future of St. Peter’s Graveyard? Well as we have seen the graveyard has no more spare capacity for burials and as the few remaining plots are occupied it will soon become closed. By the standard of Graveyards generally – St. Peter’s will have existed for a very short time – probably about 200 years when it does becomes closed. This is a clear demonstration as to how rapidly industrialisation increased the urban populations of towns such as Bolton and how limited – even as recently as Edwardian times – our ability to understand the causes of disease and to provide healthy living conditions has been.

In the decades following WW2 people have turned away from burials – both within the population as a whole – and significantly within the Christian community – at least in Western Societies cremation is now preferred. Ashes provide a wider range of alternatives for families to respectfully dispose of the remains of their loved ones and does not present the huge environmental problems that universal burial would cause in the overpopulated world of today.

As regard to Church Graveyards generally, a recent survey indicates that the remaining capacity will be filled in the next 30 years. After that a burial in a Church Graveyard – in this country at least – will become a thing of the past. As the years go by it is likely that many – perhaps all – urban Graveyards will have their monuments removed and will be converted into easier to maintain and more socially usable green space memorial parks.

There are no restrictions to visiting the graveyard at St. Peter’s Halliwell which is open every day. The Church is not generally open to the public but all are welcome at our regular Sunday services. We would request that visitors to the Churchyard be discreet if a funeral or wedding is taking place when visiting. The graveyard can be accessed either from Church Road or Moorside Avenue. Please be aware that the older areas of the graveyard in particular can be overgrown and the ground has become very uneven due to settlement. Visitors are recommended to bring appropriate footwear and take particular care when looking for graves. These areas are not suitable for disabled or wheelchair access.

Please do not park cars in front of the church or on the driveways as access may be required for funerals or weddings.

Use the menu above to find comprehensive details and instructions on the location of most graves including overall site plans, detailed location plans and the location of War Graves for both World Wars.

Should you have any concerns about existing monuments, erecting new monuments or making additions or modifications to existing monuments please contact the Parish Office. Please note: Non-approved private modifications to or the erection of monuments is not allowed. The services of a Monumental Mason or Undertaker must be used for any work of this nature and they will liaise with the Church on your behalf. For guidance on the permitted details – please refer to the Church of England Monuments Guide.